From PA to LA and Everything in Between with Yogi Roth! 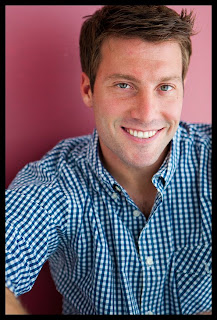 When you begin to chat with Yogi Roth it's like catching up with an old friend you haven't seen in a while.  And with how much this guy travels it's probably not far from Yogi's chats with the people he's closest with in his life.  This also goes to show his warmth and welcoming tone.

His enthusiasm radiates though his voice. Which seems to stem from Yogi's open minded view on life. The man welcomes every opportunity and wants you to do the same!

Recently, I had the wonderful opportunity chat with my fellow University of Pittsburgh alumn about life, travel and his latest book From PA to LA!  Roth's theory on living a successful life, a life lived to the fullest is something that I think we could all benefit from. Check out our conversation after the jump!

Okay, so I'm pretty excited to interview a fellow Pitt Alumn! Tell Us About Your Time at Pitt...

You know, I was lucky to get to Pittsburgh.  In the book, I feel like I'm the most honest about my time at Pitt. As far as playing football for Pitt, I never wanted to be the best at something but to do something differently.  I actually walked on at Pitt.  And I wasn't very big but just had a lot of work ethic. Between that and having always wanted to play football since I was kid, I think that had the most to do with me being able to play at Pitt.


What do you feel has influenced your drive and positivity the most??

I've been blessed with a big support group. My Mom grew up in Israel and it was never about getting straight A's, but just taking in the opportunities we have here in America. My family's really my support system and it has made all the difference.

Now, you're a big supporter of women's rights. Why do you think it's so important for men specifically to stand up for women's rights?

I believe that women are the strongest people on the planet!  I visited women's group in Africa and they are just amazing.  And the women I encountered in my recent visit to Laos as well. I really feel like you respect everything or nothing.  And that philosophy holds true to how your should live your life. A woman should be treated like a lady and the doorman deserves the same respect as the CEO of a company.  I'm a big believer in equality.


So you've just mentioned you've been to Laos and so many other amazing places around the world...tell us about your travel adventures!

It was radical! I usually travel twice a year to two different places. I've been fortunate enough to go to Africa and Southeast Asia.  And I just go where I feel gravitated to.  I purposely don't plan anything.  I just drop in and see where the experience takes me. I just love learning about new cultures. I really believe in living in the moment. What I've learned most from traveling is appreciating the simple joys. 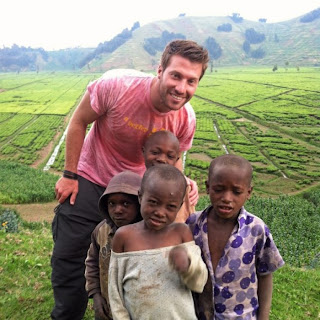 What advice would you give to those who want to travel?

Never say you CAN'T do it! Life is all about choices and being responsible for those choices. And I challenge people to find ways to do it if that's something they really want.  Another important thing is letting go. Let the world change you, don't try to change the world.   Be open to change.  Despite what you're going to seek out when you travel, ultimately in the end you discover yourself.

You were Coaching at USC at 25... Was there an exact moment when you knew you were meant to go down a different path or was it more gradual??

Oh man... I don't know.  There was one moment where I saw the kind of life that would be laid out for me if this were the career I, chose and it just wasn't for me.  I needed more time to figure out who I was.

Speaking of figuring oneself out... I would love to hear more about Win Forever which helps people do just that!

We just launched our first program!  I co-founded this with Coach Pete Caroll.  We wanted to affect people on a bigger level.  It all started by putting up ideas on a white board.  And slowly, each one of those ideas started to come to fruition and we were excited to see what our philosophy to help people could become.

Our goal is to help people realize their full potential. Through short films, art, and other media we're trying to help those in that transitional time in their lives.  Whether it's from College or a job or a relationship. We do a personality assessment to help you figure out what you really want out of life. Everyone has their own life philosophy of how they want to live their lives and it's just about really realizing what that is.

It seems like your book 'From PA to LA' is your own journey of figuring out who you are.  Can you tell us a little about the book?? 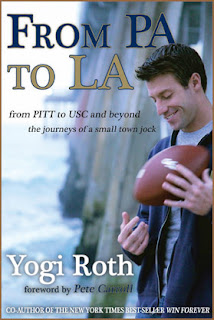 When I wrote my book the initial idea was to have a journal of sorts, to document my time coaching at such a young age so I can look back on that special time in my life.  It's about the people that have effected me molded me and shaped who I am today and the advice I received along the way.  So it's more about my journey rather than about me. You get to experience my first time traveling and living somewhere new and hopefully, see people in it that are similar to the people your life.  In a world where it's easy to not make a run at your dreams people come out of this book on fire!  Which is so important when so many out there have stopped believing in themselves.  And that is the best thing ever and why I'm so happy to have the book out there.


For more on Roth's rules to success check out WinForever and more on his travel adventures here!