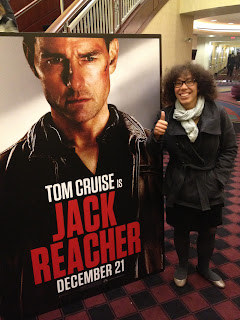 It may be Oscar season but that doesn't mean there isn't any room left for a fun popcorn film at the theaters! And that's just what you get when you go to check out Jack Reacher. The film, based on the mystery/thriller book series by Lee Child stars Tom Cruise in one of his best roles since Jerry McGuire with the action of Mission Impossible.

The film, set in Pittsburgh starts out with gorgeous, sweeping shots of the city that are the best and most interesting shots of a city seen in a while.  They do an amazing job of drawing you in and then keeps your attention with what happens next.  A sniper takes down five people on the waterfront; however, this mass shooting is really to cover up the death of only one person, the snipers actual target.

Now while there's been some controversy over Cruise looking nothing like the 6 foot tall blonde protagonist of the book there is something to be said about the charisma that he brings to the role. He really makes the role his own and captivates you every scene he's in; although Jai Courtney, who plays the rival sniper to Cruise's Reacher character does a pretty great job keeping up Cruise.  Courtney is the most most charming and bad ass bad guy seen on screen in a while and expect to see more of him alongside Bruce Willis in A Good Day to Die Hard.

Writer/director Christopher McQuarrie (The Usual Suspects) per usual delivers gritty action scenes that make you wince and snappy dialogue that makes you chuckle. So if you need a break from the heavy issues of this years plethora of fantastic but dramatic films catch Jack Reacher while it's still in theaters!