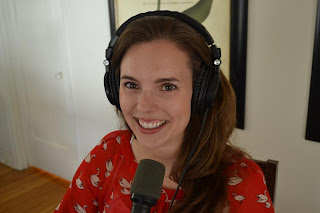 It seems like everyone with a Mac and mic has a podcast these days.  And trust me I think it's great to have such an easy and accesible way to express oneself. But what sets apart the good one's??  The one's that if you wake up and if it's not synced with your ipod or smart phone you lose your shit! It all seems to come down to on thing, relatability.

Are the people you shove into your 'ear holes' as many like to put it, people you'd actually want to have a conversation with yourself?  In a time where radio's key purpose seems to be solely to promote albums you really have to make a conscious decision as to what you listen to.

For me, Podcast ARE the radio.  I throw on my favorites and zone out during my daily commute. The one's I really enjoy not only make me laugh but make think.  And 'Totally Married' INSTANTLY became one I couldn't be without.  Elizabeth Laime and her husband Andy tackle not only relationship questions but questions about life in general and the direction you're trying to go in.  And while they're not professionals,  they are poignant. Their advice is honest and real and that's the best thing about it.  So needless to say, I was pretty darn excited to chat with the woman behind the mic Elizabeth Laime about life, finding your way on the path to creativity and her love of the Golden Girls. It  was SUPER fun although I felt I had to refrain from berating her with questions for advice in my own life as a twenty something having a quarter life crisis!  Check out my chat with the bubbly funny woman and Podcast extraordinaire Elizabeth Laime!


RBR: First off, I find it so interesting that you have these AMAZING guest on in the Comedy world (Mark Duplass, Dan Harmon, Jason Mantzoukas) however made the decision to gear the the conversations toward every day situations in life rather than talking about the 'industry' and asking the typical questions. And while there is sometime conversation about projects your guest are working on often times you and your guest cover sex, dating recreational drug use...and so on. lol All this to say, it makes your guest seem so real and creates enjoyable coversations that more people out there can relate to them. What made you feel like this was the route to go down? Was it a conscious decision to talk with people in entertainment about things other than their careers??

EL: Ha! Thank you so much~ I love that you love this! The reason I decided to go this route was two fold: a) I have a short attention span and honestly get bored by a lot of industry talk - I'd rather hear about the mundane weird stuff that I find fascinating and that makes these people human. b) WTF with Marc Maron does the industry talk SO well as do many other podcasts. I wanted to set us apart in a way that took as little effort on our end as possible.

You're super funny and have so many funny guest... what do you think is the hardest part about doing comedy? What do you think makes someone a successful comic/ comedic actor??


Thank you! I think the hardest part about making a career out of being funny is dealing with the mental game and self doubt. Being funny on command and thinking in a funny way/ presenting it in a funny way is very difficult when the medium is both: totally subjective AND totally dependent on that audience's feedback for its success. This vortex of needing approval in order to make your comedy actual, ya know, comedy, is intense and is fertile ground for self hatred, self doubt, second guessing... which is why us comedy folk complain/drink a lot.


Women in comedy is something that I feel is still sort of new ...and I'm loving every minute of it! And not until now are we really seeing a rise in comedic funny women actors. Do you feel that gap between men and women comics/ comedic actors is closing? And what, if any challenges do you feel women face in comedy??


Yes! Yes I do! I think that the gap is increasingly becoming smaller, but it does still exist. I think the challenges women face in comedy are the same they face everywhere: In some rooms, men don't want women there, ruining the "boys club"... Also, we can't ignore the fact that many of the jobs in comedy are not just jobs but lives. Writers and performers will work 17 hour days. When a woman gets pregnant or decides to have a family, she can't swing that. Men still can. There's a real unbalance there... But the past few generations of women in comedy have been groundbreaking, they've worked double-y, triple-y hard to make their funny undeniable and paved the way for more women to be taken seriously. I'm really grateful for that. 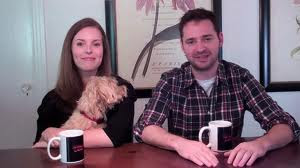 So you and your hilarious husband Andy had been doing the totally (thought you'd like the wordplay! lol) successful 'Totally Laime' podcast... what inspired you guys to do the 'Totally Married' podcast??


Totally Married had been an idea for a while - maybe even a few years. Every anniversary of Totally Laime we do a year in review episode that is just the two of us. We had so much fun doing those and the response was so positive that we thought we should do something with just us. We loved the idea of he said/she said too, that's how we came to make it an advice thing - also we like to tell people what to do! Even though we know it's not usually good advice, it's honest and we really enjoy it.

You guys get a TON of relationship advice questions... what do you think is one of the biggest challenges couples face??

I wanted to make a joke about sex but truthfully that seems to be a big issue in a lot of relationships. Overall though, I think it's lack of communication. I've been so surprised by the questions we get on issues that exists solely because the two people are scared to have a difficult conversation with each other. People are so crippled by lack of communication; they seem more willing to live in discomfort for months rather than rock the boat - I think the key is learning how to navigate tough conversations with grace and compassion. It's tricky but worth the effort.

Being a woman interested in writing and entertainment I'm always inspired when I find people out there like yourself out there who make it work. What do you think allowed you to get to a point where you ar doing things that you genuinely think are fun and love doing??


Aww, well, this is nice. I feel like I'm just getting started in many ways so it's nice to feel like I'm "making it work". Everyone's journey is different but I would say, find the thing that you love and follow that. For me, it was originally performing. I found UCB in NYC and really dug in there for a few years. Sure, there was a dream of being on SNL someday but mostly I just cared about getting onstage and making my fellow performers laugh. That was a really important part of developing my voice - some performers move to LA and book a pilot after their first improv show. That's great for them, but personally I'm glad it didn't come that quickly/easily for me. I mean, I've been doing this solidly for 10 years and still feel like I'm just getting started!

Looking back, I wouldn't change anything. I don't think I would've started these podcasts had I had early success and these podcasts are the thing I'm most proud of and most grateful for. So, that's my answer: do the work you love and be patient. As long as you are enjoying what you are doing (most of the time, of course sometimes it will be a challenge but just stick with it) then you are heading in the right direction. Also, I'd say it's important to surround yourself with people who are like-minded and supportive and ideally who are also pursuing the same thing. Toxic people can really take the wind out of your sails.

What comedians do you look up to/ have been inspired by??

Welp, I spent two hours today hanging thirty framed photos of the golden girls on my office wall, so I'm gonna have to go with: Bea, Rue, Betty, and the old one who was really younger than the others in real life.

For more from Elizabeth check her out at Totally Lame AND just in time for Vday check out her VLOG that's launching on the Totally Laime YOUTUBE channel on Feb. 14th! And we all know that laughter is a natural aphrodisiac so watch with someone you love!
Posted by Rach at 8:36 AM