My Interview with the Dynamic Duo L2! 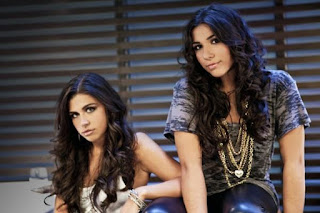 I recently had the chance to chat with NY based pop/dance group L2 made up of sisters Jess and Melissa Labbadia. The sisters, who got their start in musical theater are extremely hard working and have a real idea of the direction they'd like their music to go in. They're single 'Insomnia" which the girls recently filmed the video for in LA was featured at #16 on the Billboard top 100 dance/pop charts as well.  Check out my chat with the lovely ladies of L2 who instantly won me over with their love of 80's music!


How did L2 first come about??

Being a NY based band does being in such a vibrant city filled with so much history inspire your musical process??

So speaking of being in New York, you guys recently sang the National Anthem at the Mets game…what was that experience like?!

"That experience was incredible! We had heard that they were interested so we made a home video of us singing the national anthem A Capella and got it in that evening!"

If you could describe your music in just a few words what would they be?

What's most important to you guys when putting a song together?


"We really like to focus on the melody.  But most importantly we just like being involved in the whole process.  We're there from start to finish of putting a song together."

Who are some of your musical influences?

"Lady Gaga, Katy Perry and Kelly Clarkson are the three big ones! But we love 80's music a lot as well. Pat Benatar especiallylly!"


"We're really are best friends. And we get along along about 90 percent of the time! Also, we don't have any other siblings so it's just our parents and us so family's really important to us."

Since you guys are big into dance/pop music are there any crazy sounds, beats or other musical experimentation you’d like to try in the future?


Check out more form the girls!