So Glee was ALL about the B's Last Night: Blaine, Brothers and Bomer! 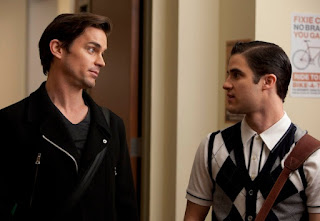 After not having aired an episode of the the show since Feb. 21st Glee returned to answer some of our lingering questions from it's last episode, which was filled with dramatic events covering some very topical issues happening in the teen community  right now.  However, it wasn't quite the episode one might have been expected.


I just wanted to comment on a few things that crossed my mind while watching the ep last night.. First off, I felt like the show took on a bit much trying to tackle Quinn's car accident and dealing with us being introduced to Blaine's family situation.

Also, I don't know if it was me or not but the songs last  night sounded SUPER recorded which really took away from the performance element of the show. Speaking of performances, I didn't really gravitate to one in particular.  Although Darren Criss' cover of  Christina Aguilera's "Fighter" really grew on me!

Lastly, the more I watch clips of Matt Bomer (White Collar) performance the more I enjoy it.  He was extremely funny and fun to watch.  I hope Glee really gains some focus and wraps the Season up leaving long time fans like myself fulfilled.