My Interview with Sam Zien of the Sam LiveCast Where there's ALWAYS food but it's NOT always about Food and where it's always FUN! 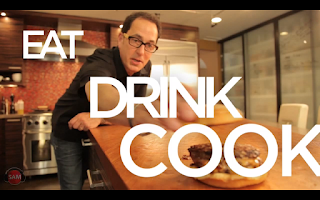 So in order to teach someone how to cook you need to be a trained Chef right?  Wrong.  With appearances on The Today Show and several cook books to him name Sam Zien, fondly known as Sam 'The Cookng Guy' with his simple but beautifully done  recipes for the 'Average Joe' blows this theory out of the water!

In probably one of my favorite interviews yet I got to chat with the self taught cook who filled me in on how a guy from Vancouver made his to San Diego and started teaching people how to cook. We also talk about what it's like working with your family, some of his favorite things to eat and why it's important to do what you love.

How does a guy from Vancouver make his way to San Diego and start cooking?!


haha! Funny story. Well I went from Vancouver to Toronto then bought a yogurt shop in Phoenix but it was too damn hot there!  and we said fuck it! Let's mover to wehre we have family and the weather is awesome! We end up in San DIego and I don't know what the hell to do. So I did what people do when they don't know what to do...I sold real estate and I hated it! So one client I sold a house to asked me to be his facility manager. I did that for eight years and I hated that. As you can see, there's a pattern here. Like the story of the three bears, I couldn't find the right fit!


So when I was sitting at my desk one day I thought 'What would I do if nothing else mattered.  And then I came up with the idea for a travel show based on a trip to Tokyo I took with my wife's brother. I mean he worked during the day so I ran around by myself. People asked me 'How did you do that by yourself and not understanding the language?!' That was an adventure to me and I wanted to encourage  others to do the same. So I thought it would be cool to make a travel show like that.


I quit my job and had a crew ready and then... 9/11 happened. That day changed thousands of people's lives; much more than mine. But still, it affected me. It really changed things for me. There was no way people would be interested in a travel show now and I couldn't back to my job but I was still on the idea of helping people do something they didn't think they could do. So food and cooking came to mind. And again keep it simple not watching a Chef that you think,  'WOW that looks good but complicated  so....let's go out and eat! So I sent out a demo and well...people hated it!  But there was this one guy in San DIego who said 'Your quirky and likable. Let's do this!' I really believe that you only need one person to believe in you. You don't need twenty people, just one. 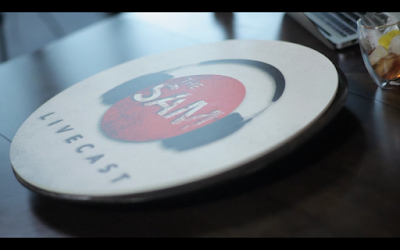 So, how does your Livecast come out of this?

Well I started a two minute segment on a local San Diego station that turned int a half hour.  Then another station came along and they were like we would love to have you. Then  for Discovery Health I did 'Just Cook This'! So about year ago a friend mentioned about getting on the internet. Then my son about nine months ago said let's do it! We put a small group together and did the first show and it was AWFUL! We were part radio talk show part cooking show. There's always food but we don't always talk about food. And we finally found our voice!

It seems like you guys have a lot of fun! Tell me a little bit about your crew!


Sure! My oldest son Max has grown and learned so much about this and he compares me a lot to Adam Carolla. He really thought my fans would enjoy something like this. Steve Sanders shoots all the hand held stuff and he's been shooting with me FOREVER! We've been to Fiji, Hong Kong... everywhere together  The we have Lynn Chyi our tall Asian guy (which every show needs!) he's our technical guy and he's amazing! And then we have Shawn Hunter who switching our camera  angles around.

What's your favorite part of the show??


I love being able to talk about anything! And I love our segment Who eats this Shit! Where we just eat crazy shit. Lynn and I did shots of clam juice!


I love reality tv not like 'reality realiy' but real television. So if I cut or burn myself or cook something that sucks I acknowledge it!  I spent an entire show with a bandaid and wadded up paper towels. People come up to me and say, "You are me in the kitchen!" We're real tv and that's what we like!


How did you start to learn how to cook?


Ya know, cooking is like riding a bike. The more you do it the better you are! Just like that we get better.  For me it was just a lot of practice! My cutting technique is better and I feel like I'm learning how to pair things better.  I like to jazz up simple things.

Did you ever think the Livecast would turn in to what it is??


No, nothing even close to what it is! I was in like a career day thing speaking to kids who were on track to go to college in a not-so-good area of San Diego.  One of the kids' siad 'I want to make a lot a lot of money.' And that's not the thing to chase. Do what you love and what makes you happy!  I feel like you put more effort into it. My only hopes were that people would watch and say 'I like that, I can make that!'

So you work closely with your family. How do you balance and work with family?


Well I've been married for twenty-six years so my wife Kelly knows me well. Working with Max is hard just since we are trying to put our two separate ideas together. But why it works is that we all have the same end goal and that's what really matters.

So you've had a few guest on the show..who woud ur fave person to bring on the show?

I'm not sure! I just really wanna know what people eat and what like to cook.


Is there anything you've been afraid to cook or something you thought wasn't gonna be good but was?


Never been afraid to cook anything; I think because I cook such simple things. I DEFINITELY made stuff that I thought was gonna be awesome and it sucked! One in particular was a breakfast pizza. Oh man, the crust was like rubber and I had a runny yoke on it and t was gross!

Some of your fave things to eat?


Vancouver has some of the best Asian food! There's a huge Asian population there and it was actually voted best chinese food in the nation by Conde Nast Traveler. So I'm really use to it and like to stay in and make stir fry a lot.

What do you think makes your dishes so accesible??


I think because things aren't out of reach. I use ingredients that you can easily grab right from the Super Market.

So the most important question for last. If I come to San Diego...will you cook for me?!


**For more from Sam check out the Livecast and the three cookbooks from the 14 time Emmy winning cook! 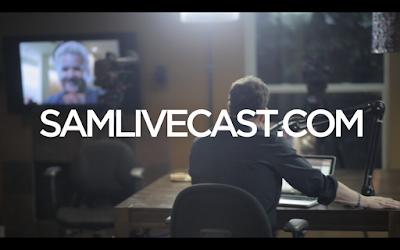