Are Biopics the new way to win an Oscar?...'My Week with Marilyn' 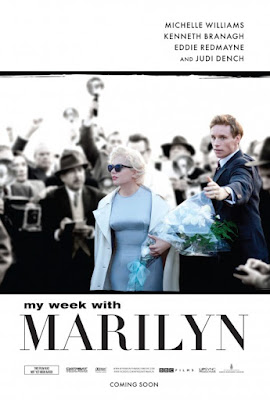 It seems that with King's Speech taking top honors at last years' Academy Awards that the trend this year is to bite off their style by doing a biopic in order to get some Oscar buzz this Season.  This became ever so present with all hype surrounding Clint Eastwood's J.Edgar staring Leo DiCaprio. Although I'm not sold on all the 'Hoover Hype' being thrown our way I was beyond surprised and impressed with how good the My Week with Marilyn trailer looks! The subtle approach that the film has taken not only to its marketing but also to its filmmaking I find really enjoyable. The film isn't over-the-top (despite having Kenneth Branagh in its cast) and Michelle Williams gives a phenomenal portrayal of the icon that is both tragic and beautiful. I'm SO excited for this!  What do you guys think??