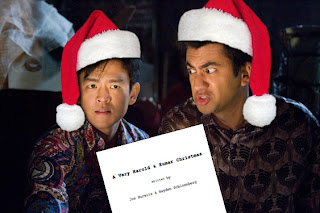 Well at least there is one thing to be grateful for in these times of a less lackluster economic situation, everything for the upcoming Holiday Seasons is pushed our way WAY ahead of time. It all starts with 'back to school' shopping commercials in July then Halloween commercials in August and now Holiday movie trailers are the newest addition! It used be sitting in front of the tv eating some delicious pumpkin pie  in November that new would unfold about the Christmas movies coming out that year; Nowadays, it's only the second week of August and already trailers for Sherlock Holmes 2 and The Girl with the Dragon Tatoo both set to be debut on Christmas day have been released. The most recent addition to this list is Harold and Kumar Christmas which, I admit the first few seconds don't look promising but as the trailer goes on all the things you love about the duo and they're commentary on popular culture begin to unfold which makes it seem as though the film will be pretty damn funny! What do you guys think??