What You've Been Thirsting For: More TrueBlood News Revealed at Paleyfest! 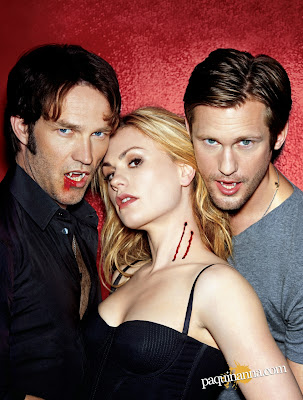 Holy crap is this exciting! Despite it being 30 degrees out just watching these sneak peak clips from the upcoming season of the HBO hit show, True Blood makes me feel like Summer is just around the corner! The cast and the show revealed some big news the PaleyFest event yesterday.

So what exactly is Paleyfest??


Named for William S. Paley, founder of both the Paley Center and CBS, the annual William S. Paley Television Festival has celebrated television's rich and diverse programming and the creative process behind the medium for the last twenty-seven years.

The TV guest list for the event that runs through March is phenomenal! It includes, Parks and Rec, Eastbound and Down, an evening with Jimmy Fallon and a Freaks and Geeks/ Undeclared Reunion!

The first clip of of the lovable yet headstrong Hoyt getting into a brawl against a bunch of Fang/ Fangbanger haters!

**Second clip has a spoiler as well as other spoiler new after the jump if ya wanna check that out!

~Season Four will revolve heavily around witchcraft. According to Ball this arc will be kicked off with a Wiccan ceremony that accidentally summons an “older entity” (which we assume isn’t friendly).

~Russell Edgington, the Vampire King of Mississippi, will return. Ball says the decision not to kill him was very deliberate, and when he comes back, “he’ll be pissed.”

~Guest stars this season include Gary Cole and Fiona Shaw as a witch.

~Bill and Sookie aren’t going to get back together so easily. Their journey will be long and arduous.

~Niall, Sookie’s great-fairy-grandfather from the Charlaine Harris books, will appear in the future (but probably not this season).