'Scream 4' Official Trailer is Here and it's AWESOME! 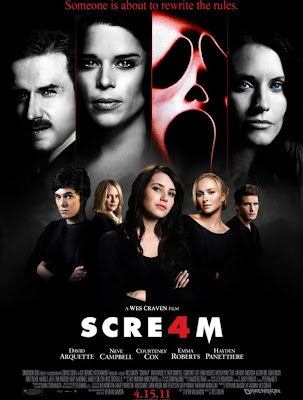 Okay, so I could go on and on about how much I love the Scream trilogy and how unbelievably excited I am for the fourth installment coming in April but that could quite possibly be the longest post EVER, warranting being called a novel.  So instead I'll just let trailer speak for itself and hopefully it will raise your excitement about the project too!  Just in case your low on details about the project, the original cast will be retuning ( Neve Campbell, Courtney Cox, and David Arquette) for the project along with original director, Wes Craven (A Nightmare on Elm Street, The Hills Have Eyes) and original Writer, Kevin Williamson (Dawson's Creek).  Joining the vets however are slew of young Hollywood including the like of Hayden Panettiere and Emma Roberts. In addition there will be lots of fun appearances from the likes of Anthony Edwards, Adam Brody, Kristen Bell and Anna Paquin.

The plot revolves around main character Sidney Prescott returning to her former High School as a guidance counselor.  Shortly after she begins to relive the horrific events that took place in her hometown of Woodsboro as a new killer is on the lose and terrorizing the suburban neighborhood. So what do you guys think of the trailer??

In some unfortunate news, Wes Craven has commented,

"There was a bumpy period when things shifted over from Kevin to Ehren. I signed up to do a script by Kevin and unfortunately that didn't go all the way through the shooting."

"That it is "not entirely" his film but his job is "much more bringing whatever experience and expertise and creativity I can".

As a big fan and for the franchises sake I hope that Scream 4 is very much a Wes Craven film.

Source: DigitalSpy
Posted by Rach at 11:36 AM