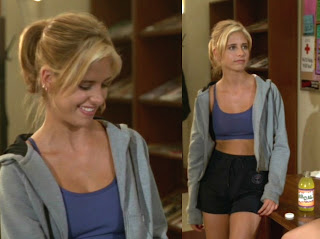 Ah, the days of slaying vampires and and playing a preppy bitch in I Know What you did Last Summer and Cruel Intentions seem so long ago (in case you're wondering I don't count the Scooby Doo movies).  Well, the bitchy blond character that we all know and love for Gellar to play is making it's way back onto our TV screens!  The Ringer is a new show for CBS that the 33-year-old actress will make her return to acting with.  The character sounds right up Gellar's acting style having to deal with the drama of finding both redemption and revenge.  Check out the somewhat fuzzy and confusing plot details released about the show stating,

“It’s an edgy thriller about redemption and about revenge. There’s a point of view of two twin sisters who grew apart over a tragedy in their past. And one now seeks redemption and the other one seeks revenge. The sister who is seeking redemption has had a much more troubled life. When her fancy pants sister disappears, she takes over her life. She’s living the life of her more successful sister only to come to find out that her life is equally as fraught with danger and complication. Her sister dies in a boating accident. The other sister takes on her persona, only to come to find out that they have a hit out on her.”

I am excited to see Gellar return to work and interested to see how the plot of the show unfolds.  It has potential to be a good drama.  What do you guys think??

Source: JustJared
Posted by Rach at 9:34 AM

Email ThisBlogThis!Share to TwitterShare to FacebookShare to Pinterest
Labels: 'The Ringer', CBS, Cruel Intentions, I Know What You Did Last Summer, Sarah Michelle Gellar