Promo for NBC's 'The Voice' 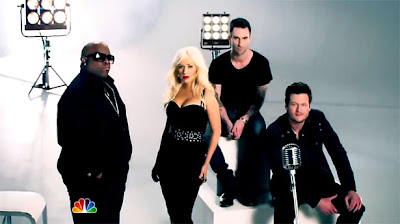 So if thought you NBC's new show The Voice was gonna be like all the rest of those vocal competitions on television, well think again.  Despite appearing on the surface as such, with its celebrity judges (Adam Levine, Cee Lo Green, Christina Aguilera and Blake Shelton) and Carson Daly as our Ryan Seacrest (yes, Cason Daly is back!) The Voice will be handled in a drastically different way.  The contestants auditioning for the show will participate in blind auditions.  The judges will have their backs to the singers and only hear, well...their voice (duh).  The other interesting thing is that the winner will recieve the personal help of the judges team of producers and songwriters which really adds a personal touch.  So what do you guys think of this whole concept??  Are you ready to get an earful on The Voice??