I Am Number Four Also: A Look at the Faces Behind the Movie 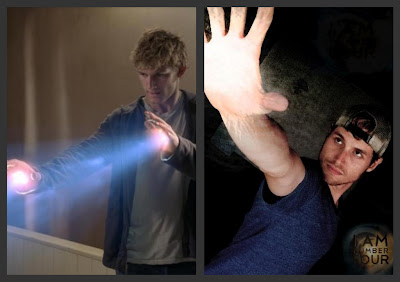 Often times we watch movies and although the stars and theatrics of the film are incredible, we never really think about what goes on behind the scenes and what exactly it takes to make all of this happen.  While you may know Alex Pettyfer and Dianna Agron, who you may not know are Ben McGinn and Alana Hixson the stand ins for the stars of Number Four!
So what exactly is a stand you may ask?  These are the people hired to be in the shot and get it perfect for the director as far as lighting and the action that will be taking place in the scene, so that way the actors can step on set and be ready to go and do their thing (entertain us!).  In this instance, Ben and Alana took direction directly from director, DJ Caruso.
In addition to performing most of the same task as the actors Ben and Alana also rocked the same type of wardrobe and Alex and Dianna had in the film as well.  Again, this was for lighting scenes properly and having continuity. 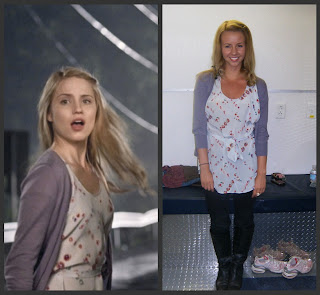 Ben has been standing in for a few years now and has worked with the likes of Viggo Mortensen and Chris Pine!  So how does one get into this you may ask?  It's as simple as sending your  headshots to your local casting office who deals with booking those types of gigs in the the area. Alana was nice enough to take some time to share her experience on set with me.  Check out her interview after the jump!  Also, I Am Number Four comes out today so be sure to check it out!
**A special thank-you to Ben and Alana for their time and help with this article!

Tell me about a typical day on set...

Most shoots entail 12-14 hour days. You can usually count on call time in the morning requiring you to report as early as 5am. This production was a bit unique since we shot overnight for a few weeks, then we shot daylight for a few weeks. For about four weeks in a row, we'd begin shooting at 6 or 7p and wrap at sunrise (unless we were on a soundstage where daylight wouldn't affect us, in which case we'd wrap as late as 7a!!!!)

For a stand-in, a typical day entails meeting with wardrobe the minute you report to get "color cover", where the wardrobe department would make sure to give you either another set of the actor's actual outfit, or at least an outfit of the same color. Though it sounds technical, this is very important for the lighting. It takes hours to ensure that the camera and lighting will cooperate well with whatever color the actors are wearing. (Fun side note: keep a look out for white clothes in movies. It is extremely rare! White does not work well with lights/camera, so even if you see a color in a movie that looks white, it was probably a light shade of another color. Bright white is a definite no!)

After stand-ins get set with wardrobe, they meet with the 1st or 2nd AD (Assistant Director) and he/she gives them "sides." Sides are a breakdown of the script in the order that they'll be filmed that day. Though stand-ins don't have to memorize the actors lines, they do have to memorize precise motions. Once the actors arrive, a director will call for rehearsals. "First team" (actors) rehearsal is with the actors, then "second team" (stand-ins) rehearsal begins. During first team rehearsals, the stand-ins will watch closely and look for certain instances where the actor will cross or any other action takes place. This could be as minute as an actor looking out a window when he says a particular line, and stand-ins need to catch on to that so when the cameras set up, they'll know which angle they need to shoot for/which lighting needs to be wired to get the perfect shot of the actor looking out of the window (would there be a reflection? what about a shadow? which direction is the sun hitting the actor? where on his face if at all?) These questions seem goofy, but the camera and electrical department needs to be extra careful... especially since it might not be a REAL window! It might be a fake wall that has craft services on the other side!)

Speaking of craft services, that is another important (and favorite!) part of our day! When everything is set and the director is ready to roll camera, we are allowed to relax, eat some good food, and hang out until they need us again. This process repeats itself ALL day!

After watching Number Four, I noticed that in the film Teresa does a lot of action, did you have to be as active in order to get the right shots?

Can I just say that Teresa is the BEST person I ever worked for?! She is so friendly, enthusiastic, excited and GRATEFUL. Though it would have been fun, I didn't get to do nearly as much active stuff as she does in the film. She is so hard-core that she trained for weeks before filming and learned how to ride a Ducati! She did as much action as possible. She also had a stunt double to do some of the scarier actions, but for the most part, she was going all out! (Another fun fact: Teresa's stunt double was a man wearing a wig!)


What was your favorite part of this experience?

I've worked on multiple films on and off-camera, and this production was BY FAR my favorite one! The best part was how caring and kind the filmmakers were. Particularly DJ Caruso, the director, made every single person feel needed and appreciated. I've worked on films in the past where most actors and even crew members are degrading and rude. On this film, DJ knew every single person's name and thanked them up and down every day. It is hard to find people of his success level with such a great spirit and heart. Some big shots don't realize that to make something this extreme come together, it takes a lot of determination and hard work from everyone involved. I could tell that DJ truly respected our work, making it not seem like work at all. I loved every minute of this job!