The Triumphant?? Return of Reality by Rach-My Marathon Journey 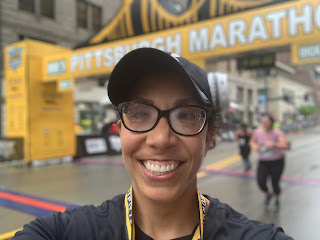 "Let's go for a run" is a phrase you'd absolutely 100% never hear me say! I hated - no, what's stronger than hate - loathed running. So you can imagine the shock of those around me -and honestly, I think I even shocked myself-when I signed up for the Pittsburgh Half-Marathon.

I played soccer growing up and while I enjoyed the short sprints up and down the field, running a long distance was something that never crossed my mind to do -  and it is certainly not something that seemed enjoyable. So, when I met my now-husband in college and found out (once I was already too far into the relationship to turn back) that he ran 5K's and 10K's for fun, I found this information mind boggling. After cheering him on at a few races, he finally convinced me to run a 5k with him. I begrudgingly agreed and with minimal training set off one foot after the other to run my first race. Things were going great until after I crossed the finish line and ended up having an "athletic" induced asthma attack! I was 40 pounds overweight at the time and thankfully, after a few minutes, my lungs stopped turning on me and finally let some air in.


Long story short this was one of several wake up calls that I needed to take control of my health. I did one of those "Beachbody" programs featured on those cheesy infomercials called 'Insanity'; and the name was fitting! This program was the hardest thing, up to recently running the Marathon, that I had ever done. Between the program and adjustments to my diet (no more Doritos and Oreos for me.  Well, I still have Oreos sometimes, but just the Halloween ones!) I was able to shed the weight and began hitting the gym regularly and weight lifting. 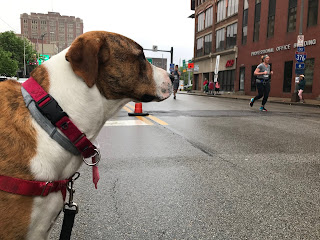 After running a few more races, I decided I wanted to tackle the Pittsburgh Marathon. Completing a marathon is something that had been on my bucket list for a while and I thought of taking on the task more of a mental one than a physical one. So like Forrest Gump so elegantly said, "I just started running."

I started with 2 miles, then 3, then 4 then 5, then 7, then 8. Finally, I woke up one weekend morning and decided it was time to tackle the whole 13.1 miles needed to complete the half marathon. Miles 1-6 were pretty fun actually; I started to see running as more meditative rather than an agonizing physical activity. However, miles 7-13 were brutal, I mean, they absolutely SUCKED! But I just remember feeling so accomplished when I finally made it up the steps to my house and passed out on my living room floor with my dog aggressively licking my face.

Then finally, race day had arrived and although I was super excited to take on these 13.1 miles on the big day, I was also pretty nervous since I had tweaked the muscle in my left foot on a previous run a week before the race. I had an Ace bandage on and it felt okay but not great. Much like the first time I went on my endeavor to tackle all those miles, the beginning leg went great! Then around mile 7 things started to get rough with my left foot cramping. Then miles 9-13 my right knee started to take a lot of the brunt of the work. If it wasn't for the amazing spectators along the marathon route cheering us on and holding up their encouraging and hilarious signs, I don't think I would have made it (there was also a sweet text from the hubs that was nice to see).  I felt like I was going to collapse until I saw the sign for mile 12. I was barely walking at this point, more like a hobble when another runner came up behind, put her arm around and gently nudged me forward saying, "Come on, let's go." Her words of encouragement were just enough to get me to the finish line and for that, I am forever grateful. 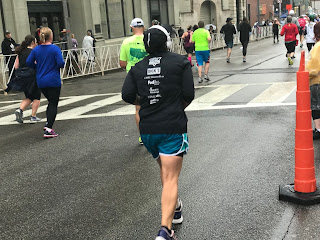 In closing, I'm not sharing this story because I accomplished something. I'm sharing it in hopes that it will encourage you to tackle something that may seem impossible to you. Honestly, we are capable of so much more than we think we are and the process of achieving something is more mental than physical. I hope you'll take away from this post a new found determination to pursue something you've always wanted to do.

Thanks for getting your 'dose of reality'!