Scream Queens Made Me Scream for All the Wrong Reasons 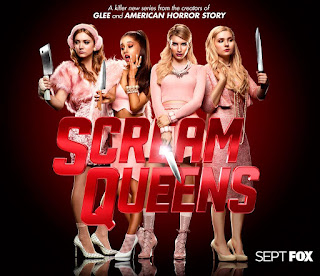 Unless you live under a rock most of you probably heard about and maybe even watched Scream Queens, from creator Ryan Murphy (Nip/Tuck, Glee)  2 hour debut last night on FOX. The show revolves around a suburban college campus gone awry when its most notable Sorority begins to lose its members by the hand of a masked devil killer.

The show's initial intent seems to be to make a big splash this Fall with huge guest stars (Nick Jonas, Ariana Grande) and be a force to be reckoned with in the ratings. But I must say, the show really failed to pack a punch (with me at least) and attempted to make up for this with quippy teenage dialogue like 'basic bitches' and the ever so topical pumpkin spice latte and all the other things the cool kids are doing these days.


Although it's just the pilot episode the characters are super one dimensional and certainly don't leave me needing nor wanting to learn anymore (minus the masked killer) about them. Chanel (played by Emma Roberts) is your stereotypical Queen B but less likable than famed 'mean girl'  Regina George. The other lead of the show Grace (Skyler Samuels)  somewhat stands out being the product of a single family household after her Mom passed away when she was 2. Her and creepy barista boy Pete  (Diego Boneta) were about the only two characters I enjoyed watching. Oh yes, and Grace's Dad (Oliver Hudson) an overprotective 'helicopter parent' is pretty great as well rocking out to 90's male power ballads alone in his car.

I guess my real bone to pick the show is it's handling of race. I'm a little tired of shows like Scream Queens hiding it's racist undertones under the cloak of the shows' resident 'mean girl' or the fact that the show's a satire and we should all just accept and be okay with the jokes that Robert's character makes. 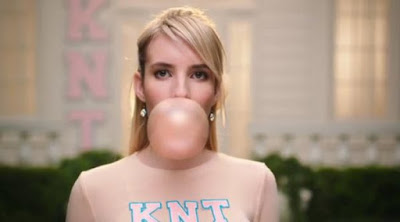 Well I'm here to say it's not okay.  It's not okay to have the only two black women featured in your show be loud and say stereotypical things like 'that's ratchet' (btw I had to look up how to spell this as this word is not in heavy rotation in my vocabulary). And it's not okay to call the Sorority's housekeeper 'white mammy'. Are you kidding me?! And it's not that things like this haven't been done well before (Scream, Not Another Teen Movie,Scary Movie, Clueless). It's just that there is certainly something missing from the equation for Scream Queens.

In closing, I just want to say  that I know Ryan Murphy is better than this. He's created two of my favorite shows ever on television. And I think Ryan Murphy a visionary genius that has been able to walk the line of inappropriate ways of making social commentary but also conveying a great and more importantly, useful message in a fun and entertaining way.  And there is a glimpse of this when Jamie Lee Curtis  who plays the school's Dean is shown talking about the downfall of our youth in correlation to social media while walking through the crime scene tape in front of the Sorority house.  But somewhere along the way on his creative journey Murphy has gotten lost and maybe it's time for him to start to surround himself with new creative minds and breath some life into his creative visions in order to resuscitate them and bring them back to life much like Nick Jonas' character at the end of the pilot!