'Out of the Furnace' Review: More than just Smoke 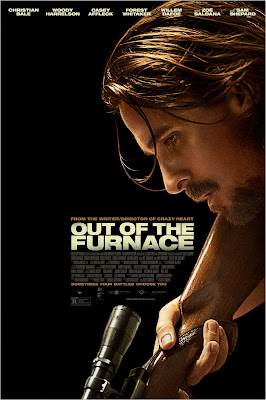 With an opening scene that's sure to go down in movie history, Out of the Furnace grabs your attention and holds tight with an iron-clad grip.  The movie's acting and dynamic tone don't letting you out of their grasp until the very end despite you gasping, even pleading, for air. Director Scott Cooper's (Crazy Heart) dark and gritty vision of small town's gone awry and family conflict is highlighted beautifully in his followup film.  The city Pittsburgh also adds quite the backdrop to this intense drama.

Out of the Furnace focuses on the relationship between brother Rodney (Casey Affleck) and Russell (Christian Bale) Baze and their struggles to overcome their individual obstacles and try to unite as a family again, especially after the loss of their parents.

Rodney, a military vet who has returned from his third tour in Iraq begins coping with his PTSD by getting involved in an underground fighting ring lead by the deplorable Harlan DeGroat (Woody Harrelson) and it is up to Russell to save his brother from a tragic fate.

Although the contents of this film are dark and certainly not what one wants over the Holiday Season it just ma be what one needs to grasp reality and realize that it is the struggle we face in our lives and overcome that makes living life so beautiful and so worthwhile. I give Out of the Furnace a solid B+ for being a riveting piece of film art with maybe a few loose ends that could have been tied up better and made more clear.