'The New Normal' : Showing America a New Kind of Family 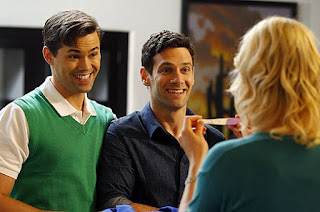 OF COURSE a gay man doean't know how to work a computer, just like a woman doesn't either...right?! At lest that's what you'd be lead to believe in the first five minutes of NBC's upcoming Fall show, The New Normal.  The show centers around a gay couple David (David Burka) and Bryan (Andrew Rannells) who have decided to have a surrogate played by the adorable and quirky Georgia King, bare their child so they can start a family.

And while the show is filled with a plethora of additional stereotypes like this, it's still remains quite enjoyable. Primarily because it comes from TV juggernaut Ryan Murphy (Nip/Tuck, Glee, American Horror Story).  Let's face it, the guys guys a beast...he's running the tv airwaves right now, somehow controlling your brain at the same time while sipping on a latte!

The show is super funny but I cannot help but to imagine the couple of David and Bryan EASILY being a future version Kurt and Blaine, characters from Murphy's hit show Glee (they even resemble older versions of the couple). Obviously, this could be my years of Glee watching and singsongs that have made me so biased so I'd be curious to see how other watchers of the show felt.

Despite the eyesore moments the make you  go WTF in your head, the show has a lot of great emotional moments. And whether you're gay or straight you relate to and feel for these characters.  That's what makes the show worth the watch and outshines those less than likable moments.

In the end, no matter the outcome of the rest of the shows' first season, it's a show that was so needed in today's society.  With sadly so much hate and bigotry in this world it's time to show that there IS a new definition of what a 'normal' family is. And it saddens that a Salt Lake NBC affiliate won't air the show.  Hopefully one day people will begin to realize that there is so much more fun to have and be enlightened on i they'd just open their eyes and learn about something rather than fearing the unknown. Judge the pilot for yourself where it's now streaming for free on nbc's site.
Posted by Rach at 2:15 PM