With Summer temperatures on the rise as well as prices for Summer movie tickets it's not easy deciding what movies to see this Summer. So when you're ready to escape the heat and duck into an air conditioned movie theater let's hope these reviews make it an easy decision for you to make. 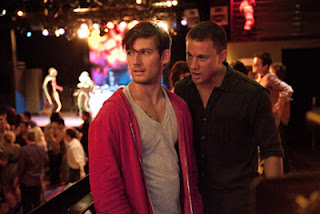 While the trailer for this film leads one to believe that you are just getting a bunch of hot male dancers shaking it there is much more to this film than the bare bare chested men.  So one may ask, especially the men out there....WHY SHOULD I SEE THIS MOVIE?

Let's start with director Steven Soderberg.  The Academy Award winning director of Traffic and Erin Brokovich.  While Soderberg is known for these bigger films, he has a unique indie filming style that really draws you in and makes you think more about what yourre watching.  He fills the screen with golden yellows and muted colors that you can't help but take notice o.  This works really well for the dark content of Magic Mike.  That's not to say the whole film is made up of dark contenet.  Channing Tatum, Cody Horn, Alex Pettyfer, and Joe Maganiello and the reast of the cast certain shell out plenty of laughs for us. Most notably Matthew McConaughey, who delivers a stellar performance as sleazy club owner Dallas.

But what really makes this film great is that there is actually a story behind all the dancing.  And that's not to take away the dance numbers as well that are actually super fun and pretty well choreographed. While Magic Mike is no Pretty Woman, it sheds light on this industry that little is known about since it's so taboo. And what the film really shows is this industry from the male perspective which is all the more reason why men who are avoiding this film should go.

Lastly, the subject that the film explores really well is this working middle class struggle to constantly rise above to achieve more than what you already have.  It's something that everyone struggles with and a topic that makes is super easy to connect with Mike. 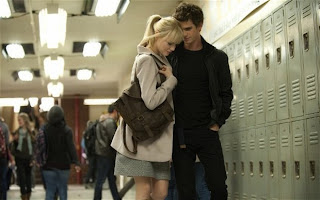 Oh, Spiderman, even with your new suit and fresh faced fantastic actors you were still unable to get get my spider-senses tingling! Marc Webb's (500 Days of Summer) new take on on the classic superhero tale while gritty and fun doesn't do something better than the series with Tobey McGuire, and that's what really made me sad. I would have been on board with this film if it would have somehow done something innovative and earned a reboot.

Andrew Garfield and Emma Stone deliver fun performance that make the film bearbale. Their chemistry is spectacular, and good for lots of laughs as well. I also really enjoyed Aunt May and Uncle Ben as well.

So, where did the film go wrong?  I totally think the film took a wrong turn with it's ridiculouslly CGI Lizard (Rhys Ifans) that Spiderman had to fight. It was just horrendous.  I feel as though this character felt too fantastical and not grounded enough to make you care about the fights or the character man behind the scales.

There are also some moments when Peter Parker reveals himself and Spiderman that just didn't feel earned.  They came to easy and with no emotional weight behind them.  Which is so surprising given the actors chemistry and the wonderful man Webb behind the camera guiding them.

In the end, this film was made for one reason and one reason only, money (which I guess it what a lot of film are made for these days).  The idea of a new generation of Spidey fans who will buy toys and comics was too good to pass up.  But as for us big kids out there they have deceived us with promises of a better and grittier film and left us hanging in their webb of a misguided reboot. It would have been more worthwhile to try to fix this with the orignal series and give us two more of those rather than this new nonsense.  Sadly, the 3D isn't even worth it and was a letdown.  Watch this at home and you'll most likely enjoy it. 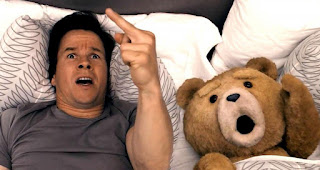 So when I first saw the trailer for this film I thought to myself, "You've got to be f*ing kidding me? A movie about a talking Teddy Bear?!". And thought I would most certainly being catching via Netflix in a few months.  But the Seth McFarlane, the creator of Family Guy (a show that never really caught on with me) was able to bring this live action comedy about a boy who wants to bring his Teddy Bear to life and brilliantly at that.

As I walked out of the theater I couldn't help to but to think about what made this film that in all theory shouldn't have worked turn out so well.  In the end, I came to to the conclusion that it was the mix of pure comedic genius from McFarlane and the commitment of the actors to their roles. Mark Wahlberg and Mila Kunis make this unrealistic scenario seem very real.

The relationship between Ted and John (Wahlberg) is what is at the heart of the film not this outrageous  idea of a Teddy Bear coming to life. Much like Sam and Bumble Bee in Tranformers this movie is about the bond between these two that at times has you laughing so hard you have tears while other you have actual tears from the the strong emotions present.


Thankfully, this is a trailer that while gives us some of the big jokes in the film, doesn't give everything that is great away but unfortunately doesn't draw people in very well wither.  There are fantastic 80's references that really make you nostalgic for your younger years.  Also, there is a fantastic cameo that I NEVER saw coming which I think you'll really enjoy.


while this film most definitely delivers on the laughs it does something even more important.  It reminds us not to lose that child like innocence that we were all born with.  And to never stop dreaming.  And yes, this may be cheesy and no, it is not reinventing the wheel it is, however a message that in these tough times we need to hear.
Posted by Rach at 8:45 AM