Trailer for Jennifer Lawrence's New Movie 'House at the End of the Street'! 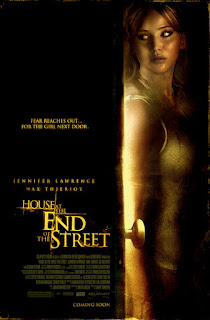 So what's next for the star of the biggest film franchise out right now....well a low budget horror flick of course! Jennifer Lawrence from The Hunger Games  new project will be the thriller/horror flick House at the end of the Street.  And while the name alone as well as it's concept may not be compelling enough to draw you in it seems like there's a little more to this flick than what meets the eye.  Here's the synopsis:


Seeking a fresh start, newly divorced Sarah (Elisabeth Shue) and her daughter Elissa (Lawrence) find the house of their dreams in a small, upscale, rural town. But when startling and unexplainable events begin to happen, Sarah and Elissa learn the town is in the shadows of a chilling secret. Years earlier, in the house next door, a daughter killed her parents in their beds, and disappeared – leaving only a brother, Ryan (Max Thieriot), as the sole survivor. Against Sarah’s wishes, Elissa begins a relationship with the reclusive Ryan – and the closer they get, the deeper they’re all pulled into a mystery more dangerous than they ever imagined.

What I love so much about the new genre of Horror that is being given birth by films like the recent Cabin in the Woods is the high concept horror movie.  Now a days it seems like movie studios have more faith in it's audience goer than before.  They seem obliged to give us more than just the blood and gore.