A BLAST and Full of Laughs!: 21 Jump Street Review 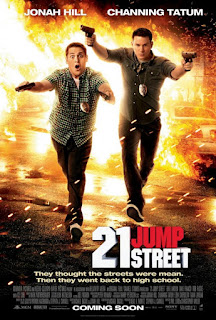 First off, let me start by saying, based on the trailer alone I had NO desire to see this film.  But then  suddenly, rave reviews began to pop up everywhere (kind of like zits before a big event).  So I gave in to the "Chandamonium"  and decided to see  21 Jump Street .  And I've gotta say, I don't think I've laughed that hard in theaters in a very long time; at least since Superbad. Which is no surprise since they have a funny actor  in common. Jonah Hill continues to hone his comedy skills, and keeps getting better.  Along with Channing Tatum, they create an incredible duo who play well off of one another. I must say, I was genuinely impressed with how funny Tatum was. He and Hill, along with snappy dialogue, are the sole reason this film works so well.


I guess I'll dive into to this review by saying that I didn't know anything about the original 21 Jump Street which starred Johnny Depp.  So I don't know if that could enhance your viewing experience, but it won't effect it either in my opinion. The movie really puts a fun modern spin on high school life that was interesting to watch.  In case you didn't know to sum it up, 21 Jump Street revolves around our two main characters Jenko (Tatum) and Schmidt (Hill) who are less than stellar cops who get placed into an undercover program as a last resort to try to reform them rather than fire them. 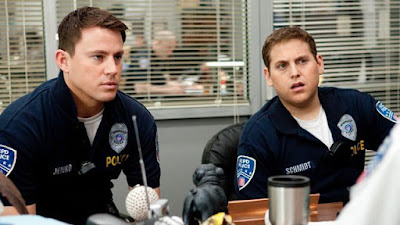 This program forces Tatum and Hill to go undercover as brother's to infiltrate a drug ring at a local High School. Playing our douchey popular guy is none other than Dave Franco, brother of James Franco (yeah, that one) who is phenomenal in these types of roles and has played them numerous times. Other than these guys there really aren't any memorable characters. Everyone gives decent performance, however they just seem like caricatures, leaving Tatum and Hill the only ones you can really relate to. With the exception of Molly Tracey played by Brie Larsen who is Hill's love interest in the film.


The film provides laugh after and in moments you'd lest expect. It pulls you in right from the beginning with it's flashback scene from when Jenko and Schmidt were in High School together with Eminem's "The Real Slim Shady" blaring. And the film continues for the most part to keep you engrossed. I only felt that there was a slight lull toward the middle of the film making it feel a little long. 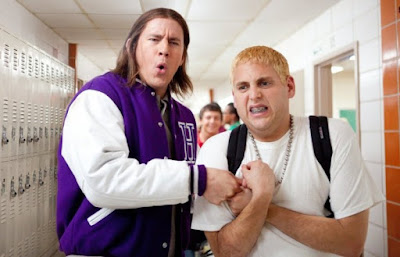 I definitely found this movie to be WAY more fun than I had initially thought! The party scene is even funnier than in the previews! It's a really fun theater experience that I highly recommend and does a wonderful job of paying homage to the original series with some obvious yet fun throwbacks.