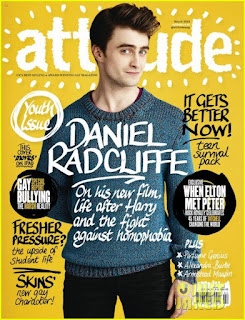 Daniel Radcliffe recently spoke with 'Attitude' magazine about why he's a supporter of Gay Marriage.  This is no surprise as he has been influential in supporting the Teen Crisis Hotline The Trevor Project which helps prevent teen suicides in the LGBTQ Community. Check out what the star of the recent Woman in Black had to say!

On teen suicides: “It’s not surprising when you consider how accessible a bullying victim is now. You used to be able to escape at the end of a day: now you can be hunted by mobile phone, Facebook, Twitter. It’s terrifying.”

On sexuality: “Don’t define as straight or gay, define yourself as people and help another person if they’re in trouble.”


On marriage equality: “The ultimate reason gay marriage should be legalized everywhere is because, as a kid, you look to your mum and dad and they’re married; then you look at the gay couple who’ve been together for the same amount of time, but because they can’t get married their relationship doesn’t seem the same. Yes, gay marriage is about symbolically blessing a relationship, but the larger issue is about transmitting a fundamental message about equality. Gay people should have equality in law everywhere.”