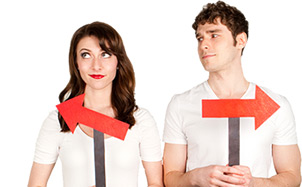 With a name that sounds like the newest addition to Ben & Jerry's flavors list and the sweetness to back back it up this musically gifted dynamic duo were a blast to interview!  Karmin, which is made up of Amy and Nick who not only work together but also date are coming out of Boston with a bang after one of their latest video covers, Chris Brown's "Look at Me Now" went viral. Check out what the two had to say about how they met, their experience on The Ellen Show, and what's up next for the group!
Reality by Rach: How long have you guys been studying music?

Amy: Oh goodness, piano lessons started in 2nd grade for me!
Nick: I had a year of piano in 6th grade, but quit for sports haha.
Between us, probably 25-30 years of studies. We met at Berklee
College of Music where we finished the 4 year degree program!


RBR: What instruments are you guys trained on?


RBR: How did you guys first decide to team up and make music together?
Nick and Amy: We started dating almost 6 years ago! Wrote a few songs together
(before Karmin was our name) and played in lots of other music groups
around Boston. Eventually, we decided the best way to dedicate 100%
to our music was to pursue it together. People think we're crazy for
being a couple and working together, but it works somehow! Karmin
became our official group name in January 2010.


RBR: What was the whole ELLEN experience like?! (where were u guys when you
found out that she wanted you on the show what has life been like
after being on her show?)

Nick and Amy: We got the first call in Boston after the video started going viral.
We spoke to her team on the phone a bit and they said they would show
Ellen the following day and get back to us. The next day they told us
she had aired our video and wanted us to fly to California the next
day! Such a crazy experience! Ellen and her entire team are just as
you would expect: amazing people.


Did you think that you would get the response that you have gotten for
your cover of 'Look at Me Now'?

Nick and Amy: We had a strange feeling...like something big was about to happen.
The calm before the storm! Amy said she didn't sleep well the night
she posted the video because we had so many emails coming in. We knew
something was happening, but didn't ever imagine it would garner over
10 million views in just a couple weeks!

Nick and Amy: We love Janelle Monae's Tightrope, one that we covered last summer.
Obviously the new "6 Foot 7 Foot" by Lil Wayne was a blast to do! I
think we have to love ALL the covers we do or else it's almost
impossible to get creative with them!

RBR: Who are your guys musical influences?

Nick and Amy: Kanye West, Gwen Stefani, the Beatles, Coldplay...pretty much any GOOD
music! We were listening to Mozart earlier today!


Will you guys be going on tour in the US this Summer (I hope the
answer to this one is YES!)?

Nick and Amy: Oh man, we would LOVE to say yes! It's all up in the air for now,
just making some important business decisions and writing lots of new
music for an album! It would be nice to tour and introduce our
amazing supporters to some amazing new music, yes? ;)


Check out MORE from Karmin plus original music from the group on their official site!
Posted by Rach at 8:49 AM