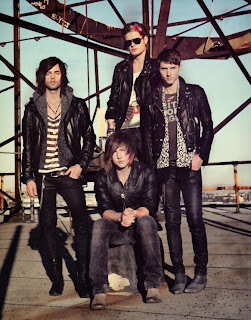 Check out the new video "Tonight, Tonight" from Cali band Hot Chelle Rae! About their sound guitarist Nash Overstreet (and yeah if that last name sounds familiar his brother Chord Overstreet plays Sam on Glee) had this to say about their sound,

“We wanted the music to sound larger than life."

We wanted it to sound explosive and new and fun and be better than anything out there, adds frontman Ryan Keith Follese. Indeed, stomping, blistering jams like “I Like to Dance,” “Never Have I Ever,” “Say (Half Past Nine),” and “Bushes,” will sound equally fierce whether they’re blasting from a car stereo or emanating from an arena stage."

Check out the cameo from Chord and btw his bro is the red haired guitarist!