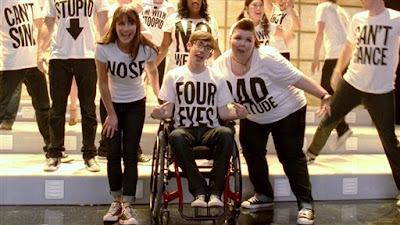 Let me just start off by saying that I am such a sucker for sentimental storylines about things like self love and acceptance.  So when Glee's most recent episode "Born This Way" started off with Rachel's nose being broken by Finn's bad dance skills and she decides to get a nose job causing the whole episode to be about accepting yourself for who you are I knew I was hooked!  SO much was packed into this epic episode that it had to be 90 minutes!

First off, in the race for Prom Queen we not only have Quinn running but now Lauren Zizes and Santana are throwing their names into the race as well, however, for very different reasons.  Lauren is tired of the pretty girl always getting the votes and thinks it's time for someone more average looking to get a shot at it while Santana has a plan to get Kurt back at McKinley by "dating" Karofsky and pulling in the jock and Glee Clubbers votes.  She thinks that if she wins then she can convince Brittany to leave Artie and be with her.

Meanwhile, Will is trying to help Emma deal with her OCD as it has really began to take over her life.  After much resistance Emma has finally decided to see a therapist and deal with the issue head on. In the end when all of the Glee kids are wearing shirts about things they don't like about themselves but have chosen to accept them since they were born that way Emma shows up wearing her shirt with OCD written on it.


The BIGGEST news of all though, KURT IS BACK!  And boy did he return with a bang!  Blowing us away with "As if We've Never Said Good Bye" from Sunset Blvd. I am ecstatic that he is finally back and just in time for Nationals!  Santana was able to convince Karofsky to finally back off and change his ways toward Kurt.

Throughout the entire episode we see people struggling to accept the person they really are.  It is revealed that Quinn use to be overweight and a completely different person before she transferred to Mckinley and she struggles to accept the old Quinn, or should I say, Lucy.  And Santana is still struggling to be open with  her sexuality and in a hilarious scene she refuses to wear a shirt that Brit has made for her that says "Lebanese" instead of "Lesbian".

Lastly, I've gotta say this may be one of the few, if not ONLY episodes where I liked each and every scene and song!  Great choices were made in song selection for this entire episode.  My favorite however would have to be "Unpretty/I Feel Pretty" from Quinn and Rachel.  They both really compliment one other and the scene is really well shot and done in typical "Ryan Murphy" fashion like back in the days of Nip/Tuck.

It's episodes like this that really show what a genius Ryan Murphy is at creating shows.  He makes you feel and can keep you engaged from start to finish of a 90 minute episode which is a really incredible feat.  It's like I always say, when the show focuses on the on issues that really matter to these characters and on their emotions it creates a really great experience!  This episode gets an A for being it's true self and teaching us all to accept ourselves!