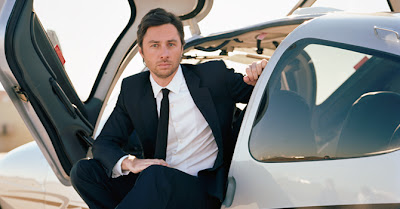 Although his hit TV show Scrubs only ended a little over a year ago it feels like FOREVER ago that we've heard from the witty and talented Zach Braff.  Well if anything can jump start a career again it's Twitter and although Braff only surfaced on the social networking site a few weeks ago he's already got 35, 000 people following his every tweet!

Besides writing witty quips in under 140 characters, which, you can imagine he is quite good at Braff has also been busy working on a play as well as learning how to fly a plane!  Second Stage Theatre will be including All New People which is a comedy penned by Braff in it's lineup to close it's 32nd season.  Braff also has a site where he post random videos and pictures and feels a lot like a continuation of the strange yet funny occurrences that took place on his show.

Braff had this to say about getting his pilot's license,

I earned my pilot's license in November 2008, and it was one of the coolest moments of my life. It made me want to look at all the other things I fear and learn everything there is to know about them too.


Source: Who Say, BroadwayWorld, Men'sHealth
Posted by Rach at 9:32 AM