'A Girl Walks Into a Bar'... A New Movie Feat. a bunch of People We Haven't Seen in a While! 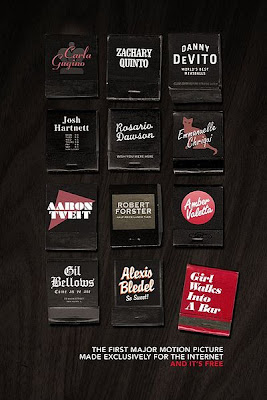 As I was perusing my twitter news feed I happen to come across a tweet commenting a new movie feat. one of my favorite actresses Rosario Dawson!  The movie titled, A Girl Walks Into a Bar is brought to us by Sebastian Gutierrez (Snakes on a Plane, Gothika) who not only directed but also wrote the film.  The film has an awesome cast comprised of Danny Devito, Zachary Quinto, Josh Hartnett, Emmanuelle Chriqui, Alexis Bleidel and Carla Gugino who is Guitierrez's girlfriend.

The film sort of has an Oceans Eleven kind of feel to it with an all star ensemble cast and weird plot to go along with it.  The plot of A Girl Walks into a bar revolves mainly around Quinto's character who is on a quest to kill his ex wife.  The movies jumps around to different bars as the evening unfolds.  Check out the trailer and let me know what you guys think!  The other cool thing about the film is that it will be debuting on YouTube on March 11th!