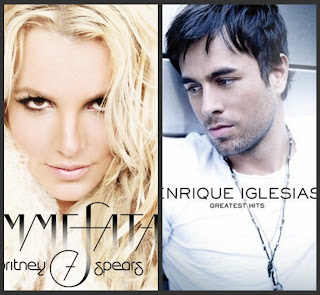 Britney Spears is heading out on tour for her new album Femme Fatale and while a Britney show alone is exciting enough this time she's teaming up with Enrique Iglesias!  The twosome will hit the road in June for a Summer tour that is sure to blow your mind.  SO can you guys handle all that sexy in one place??  If you're ready than here are the tour dates!

**UPDATE Enrique will not be touring with Brit.  The Pop star recently tweeted,

@enrique305Enrique Iglesias
Hey guys, sorry for the confusion regarding a possible tour in the summer with Britney Spears. We are on the Euphori...

and continues to say that he is on a solo tour to promote him new album Euphoria and will be having some US dates soon!  The statement comes after his camp released this,

"Unfortunately, Enrique Iglesias and Britney Spears will not be touring together," his rep said. "Despite initial reports based on formal discussions of the possible run, Enrique will continue on his solo tour in support of his new album EUPHORIA. Enrique has great respect for Britney and is a longtime fan of her work. He is very sorry for the confusion this might have caused to anyone."

Now while it's cool that both of these huge stars are on tour separately it's kind of bummer knowing that they will not be combining their powers for one epic concert event!  Are you guys as disappointed as I am??

Well to cheer you up check out BRITNEY'S tour dates after the jump!