Life Isn't All Rainbows and Unicorns in the Land of Glee! 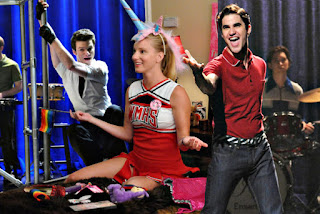 I was surprisingly impressed with the latest episode of Glee especially with it's ridiculous title I am Unicorn! I was into the episode from start to finish! Starting from the wonderful intro of Brittany offering to be Kurt's campaign manger to everything coming full circle with her ending up running against Kurt by the end of the episode. And that's not the only thing not going Kurt's way; it looks like his boy toy Blaine unknowingly be stealing the lead away from in the school's production of West Side Story.

We also see the return of Rachel's mom (Idina Menzel) and it looks like she'll be a decent part of this Season and she is teaching part time and McKinley. From the looks of things this looks like it's going to be a pretty drama filled Season with Rachel reconnecting with her Mom and Quinn and Puck fighting to get full custody of their daughter.

As always I really enjoyed how the show dives into understanding yourself and  figuring your identity at such a tumultuous time in one's life. It's so well done and I appreciate the effort they put into it. I feel like it makes for both heartwarming and heartbreaking moments. Chris Colfer just commands the screen  this episode and it's so intriguing to watch him strive to play a part that is so manly in the musical and being frustrated by never being considered as the type to play that kind of role.

As promised so far the show has kept it's promise so far of focusing more on plot and less on musical numbers with only three numbers an episode. And although it's only two episodes in I'm pretty impressed they've lasted this long! So I give this unique Unicorn of an episode an A+ for keeping a promise and delivering!

What did you guys think??

**This was my ABSOLUTE fave performance from this week's ep!