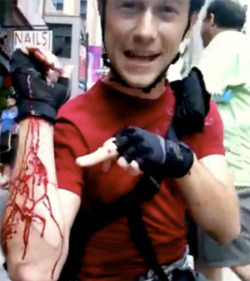 So this looks AWESOME!! So man of you may have seen a pic floating around a while back of JGL riding a bike and also hearing that he got some serious bumps and bruises while filming an upcoming movie. Well the trailer said film, Premium Rush is FINALLY here. Here's the synopsis:

Dodging speeding cars, crazed cabbies, open doors, and eight million cranky pedestrians is all in a day's work for Wilee (Joseph Gordon-Levitt), the best of New York's agile and aggressive bicycle messengers. It takes a special breed to ride the fixie -- super lightweight, single-gear bikes with no brakes and riders who are equal part skilled cyclists and suicidal nutcases who risk becoming a smear on the pavement every time they head into traffic.
But a guy who's used to putting his life on the line is about to get more than even he is used to when a routine delivery turns into a life or death chase through the streets of Manhattan. When Wilee picks up his last envelope of the day on a premium rush run, he discovers this package is different. This time, someone is actually trying to kill him.


I'm really intrigued by the concept of this film. What do you guys think??