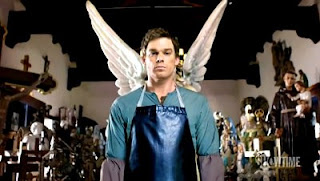 Sure NORMALLY religion and murder aren't typically two terms that work in conjunction with one another however, in Showtime's hit show Dexter they most certainly do! Michael C. Hall returns in his role as the twisted forensics detective Dexter Morgan for a other season of the show that, if the trailer for the upcoming season is any indication looks to be continually getting better. As guest star Brea Grant commented,


The new season has “a lot of religious elements in it. That’s sort of exciting to see all that play out.”