Will Ferrell in 'Everything Must Go' Trailer 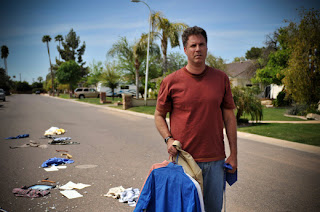 In a role much like the part he played in Stranger Than Fiction, Will Ferrell once again tackles a character that isn't a caricature but an actual real person with real problems!  In his latest film, Everything Must Go, Ferrell plays a guy having the WORST day EVER and that's an understatement. His character loses his job, his wife and his home all in one day! However, it's not all bad news for Ferrell as it turns out in the end that losing everything will help him to gain the most important thing of all, himself.

The screenplay is adapted from Raymond Carver's short story.  Carver,  who played a part in revitalizing short story fiction in the 80's is one of my writers that I had the opportunity to read while in school and if the trailer is any indication then this film seems like a wonderful adaptation! Check out the trailer here! What do you think??