Glee Takes Us to Prom! 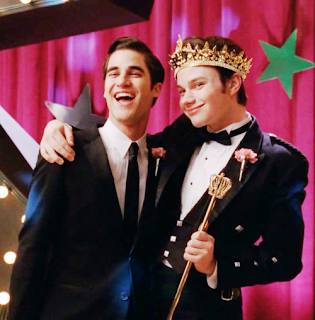 Oh boy you can just feel the tension as this season comes to a close! And sadly just as the show is ending for this it's on top of its game and HAS NEVER BEEN BETTER! I am definitely going to be sad to see it go.  The past few episodes have really been coherent, linear and NOT all over the place in order to accommodate a themed episode as has happened on numerous occasions in the past.  For this I give a HUGE thank-you to Ryan Murphy!  The man knows when enough is enough and has taken control of his show and as the season progresses it becomes more and more how it's his show and how he's created such brilliant shows like Nip/Tuck! I know I bring this up a lot it just seems like Murphy gets a lot of unwarranted flack for Glee. Alright, I digress! BACK to Glee!

So this week's episode Prom Queen had great musicals number and a few surprises that made me wonder "why is Prom in real life never like it is on TV or Film?" So disappointing.  So the Glee Club is picked by Principal Figgins to perform as the band that had already been chosen back out (the BEST part about this is the gig will pay a big chunk of the kids trip to Nationals!).  Meanwhile Artie is still trying to win back Brittany and get her to go to Prom with him.  Also, Kurt asked Blaine to Prom but Blaine doesn't want to go because of terrible experience at a school dance at his old but Kurt finally convinces him.  Finn is still in love Rachel even though we didn't so anymore and get SUPER jealous when Rachel decides to go to Prom with her ex Jesse Saint James and end up fighting Jesse at prom (AWESOME scene by the way!). Finally, as a cruel joke the student body at McKinley High voted Kurt as Prom Queen and although he was devastated at first he turned around by making a Royal Wedding reference " Eat your heart out Kate Middleton!" and Krofsky and Santana still have not come out. However, in a BRILLIANT scene Karofsky FINALLY gives Kurt a sincere apology for how he treated him.

Now, on to the music.  Alright, so EVERYONE is covering Adele's "Rolling in the Deep" right now and rightfully so as she is AMAZING and while the song started off sort of typical in really picked up and Lea Michele and Jonathan Groff sang the HELL out of it turning it into a really great performance!  I also really enjoyed Darren Criss' cover of "I'm not gonna teach your boyfriend how to dance with you".  He ALWAYS commands the stage and give incredible performances!  And of course...there was Rebecca Blacks' "Friday".  Who would have EVER guessed that the song everyone was pre-gaming to just a few weeks ago would end up on Glee?! In the end it made for an performance and very fitting for a show like Glee that has no qualms poking fun at itself. Overall, I give this episode an A for making me wish my Prom had someone get caught trying to spike the punch!