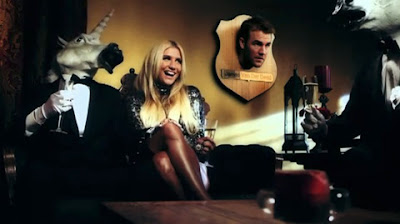 Well if it isn't a new video from "Ke-dollar sign-ha"!  Ke$ha released her new video for her single "Blow" and in typical Kesha fashion it was a whole ball of strange feat. rainbows and men/unicorn creatures.  However, the highlight of the video was the appearance of James Van Der Beek!  Between Van Der Memes and now this Van Der Beek is more popular now then when he was Dawson's Creek!  My favorite parts of the video were Ke$ha calling James "Jame Van Der Douche" and the epic gun fight that took place between the two at the end of the video.  All in all "Blow" sounds likes your average Ke$ha song that will most likely be heard in every club and on top 40 stations all weekend.  Enjoy!

Source: OhNoTheyDidn't, JustJared
Posted by Rach at 11:20 AM