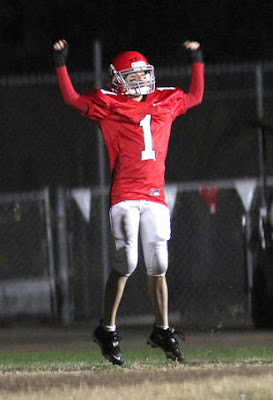 So it's FINALLY here, the epic Superbowl episode of Glee that we've all been hearing about for months now!  So were you WOWed??  I know I was!  I really wasn't sure what to expect when I found out that Glee was going to have an episode airing after this year's Superbowl.  I was most definitely thinking they would deliver a  themed episode and do something over the top in order to draw in a new audience that may have never seen the show before.  However, I was only partly right about my predictions.

Now while Glee most certainly outdid itself with there "Thriller"/ "Heads Will Roll" mash up we didn't get that themed episode that everyone at first thought was happening.  Instead, the focus was on the plot.  We got a simple plot of the geeks and jocks coming together in order to win a football game and save their school's pride, which kind of reminded of the plot of Lucas or any other cheesy 80's movie about High School.  However, just when you think everything is all "sunshine and rainbows" things never turn out quite like you think.  Rather than a united front at McKinley High, Karofsky (Kurt's bully) still won't succumb to the smooth dance moves and chicklet like smiles of the Glee Club.  He is a continual obstacle to himself and the unity of the High School.

Also, something I really didn't see coming (besides mashing up Thriller) were Quinn and Finn kissing (whaaaat?!).  Season One seems SO long that you almost forget that they were dating and now that both of their characters are changing into different people over the show with Quinn being more caring and Finn becoming less of an idiot jock and more of an endearing leader their chemistry is great!  This happening in High School terms if you all can remember that far back means some serious drama is coming our way!

Now onto what we all look forward to in the show, the MUSIC!   As far as Glee's "Thriller" was concerned I thought they did a fantastic job!  They didn't try to compete with Michael's song ( I mean after all he was the 'King of of Pop'!). Rather than competing to do a better version they just had fun with it and that's why it worked.  It didn't come off as pretentious as though the show was trying to give us a better version of a classic song.  However, what really surprised was Darren Criss' version of the Destiny's Child song, "Bills, Bills, Bills".  That guy is amazing and blows me away every time her performs on the show, each time he clearly shows why he was such a great addiction to the cast!  I give this episode an A for the cast still maintaining to awesome while in zombie makeup!