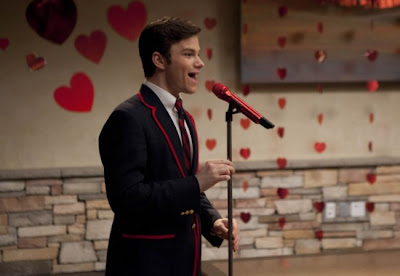 Maybe it's just the after effect of such an awesome Superbowl episode or just that there hasn't been enough of Kurt performing but this week's Glee, Silly Love Songs just didn't do it for me.  I was expecting a lot more to happen (especially with the whole Finn and Quinn kiss).  Ah well, guess we'll have to wait and see where that goes.  It just seemed that the show was lacking the finesse that most of the other episodes had this season.

The first thing that really frustrated me was how quickly creator Ryan Murphy changes how you feel about his characters.  You go from routing for someone like Finn in last weeks' episode to suddenly loathing him for his conceitedness and for trying to get in between Sam and Quinn.

It's definitely hard to hit a home run every time with a show that combines both plot and song.  You always run into the dilemma that when one is good, the other will be lacking.  And that is exactly the case with this episode.

Now since this episode fell short in the plot department it was most definitely saved by solid song selection.  The songs were so that it felt as though the story for this episode was crafted around when it definitely needs to be the other way around.  Some of the songs I really liked were "Fat Bottomed Girls" and "Firework".  I really dug the firework performance because it reminded a lot of when Rachel sang Rihanna's "Take a Bow" in the first Season.  There was so much emotion behind that made it great.

The other thing that made this episode of Glee great was the Lauren Zizes (Ashley Fink) character.  She has some great lines and it was pretty cool to see part of the plot revolve around someone new on the show.  Also, Santana having the crap kicked out of her by Lauren and being called out for her bitchiness made the show pretty damn entertaining as well.  Overall, the episode was a C but Glee still has my heart.