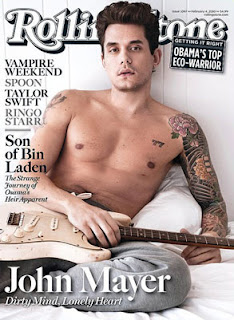 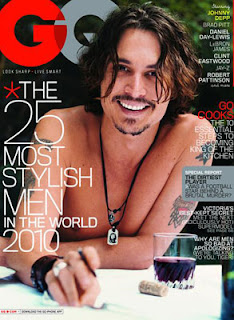 If you're like me and have trouble getting through novels, not because you're not intelligent enough, but you simply just don't have the attention span. Then look no further then the upcoming issues of GQ and Rolling Stone. Now, I'm someone that truly looks forward to a new magazine coming out. It's like finding a prize in my box of cereal in the morning; It's grrreeeat! Lately, I've been in a magazine slump reading and re-reading my current Women's Health partly for the articles and partly because the most badass chick ever, Pink, was on the cover. What is great about the upcoming issues of both of these magazines is that the men who grace the covers are equally as interesting to read about as well as look at. I'm talking about none other than Johnny Depp on GQ and John Mayer on Rolling Stone. Depp is part of the 25 Most Stylish Men in the World. Mayer on the other hand is tackling something deeper and opening up about his past relationship with Jennifer Aniston. So be sure to grab your coffee and doughnuts, and by the time you're done with your breakfast of champions you will have delved into some great reads to start your day!
Posted by Rach at 6:54 PM