A Love Letter to Scream: A Film that Forever Changed the Horror Genre In 1996 a film came out that would forever change my love of movies and draw me into the world of horror films forever more.  Yes,  I was only 10 when Scream came out so as you can imagine I didn't see it until later in my teens.  Side note, some friends and I did scour the local mall looking for some poor schmuck to buy us tickets to Scream 2 when it came out a year later. And yes, it worked, And yes, I was scared shitless.  But in the best way possible!

This movie is the reason some girlfriends and I started making prank calls when we hangout after school. Terrifying the person on the other end of the line with those famous words, "What's your favorite scary movie?"
Okay okay,  so I'm not condoning this juvenile behaviour. We were just some dumb kids with way too much free time on our hands.

But still this movie made such an impact on me. And little did I know how it would influence me in my writing and choice of wanting to make work like this that resonated with a generation one day if I ever got the opportunity. A realization I made well into my twenties.

For me, I think this film intrigued me because although it was a scary movie it was so self aware that it also made the movie funny as well. And although I still jump every time I watch.  I also now watch the films again and again not just for the scares but for it's incredibly witty dialogue and well rounded characters. I can quote almost every line from every one ever made. My poor boyfriend has watched these more times than he can count and will be again this evening in honor of the passing of its director Wes Craven. And while I'm saddened by his passing. I am grateful that he has left behind work that has not only entertained me but inspired me. So thank you Wes Craven and thank you Scream for continually scaring me after all this time. 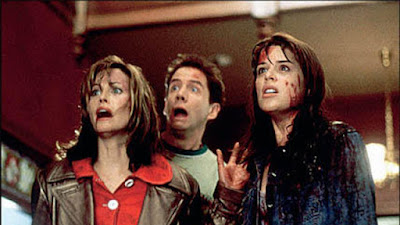