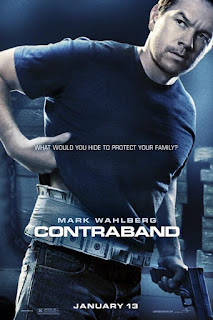 So I ended up seeing the new Mark Wahlberg flick Contraband last weekend for my birthday and I must it delivered me an action packed birthday gift in a neat little bow! In the harsh months of Winter, not only are the trees bare but so are our movie selections. So with this or Beauty and the Beast 3D as my options and already having the little kid in me brought out by watched The Lion King on Blu-ray the previous day, Contraband it was.

The film started off with some grainy footage of Wahlberg, Kate Beckingsale and Ben Foster at a friends' wedding where we get some back story on the trio.  Beckingsale and Whalberg married and have been friends with Foster's for years and have all turned their not so respectable lives' around.  Unfortunately Beckinsale's brother, played by Caleb Landry Jones from X-Men First Class doesn't live by the same moral codes. He ends up getting into some serious trouble with some local gang bangers, lead by Giavanni Rabisi. Wahlberg's character steps in to help his wife's little brother and let the drama begin!

Filmed on location in New Orleans the backdrop to the story in gritty and and works well with the film's numerous grainy and dar scenes. For a decent part of the movie taking place a huge cargo ship it's actually pretty damn exciting.  I seriously felt my head spinning with one action scene after the other which really helped the film move along a quick pace (which was nice since it has a run time of 2hrs and 50 minutes)!

Contraband takes a lot of twist and turns that you really don't expect, especially when it comes to the ending but all in all it's your typical action flick. I most certainly had a clear picture of what the conclusion of this film would be and was certainly delivered something quite unexpected. I thought the performances were good and give 'Marky Mark' credit for being able to draw an audience after and making the film number 1 it's opening weekend! I give this film a solid B and really recommend it for something to do to rid yourself of those Winter blues.
Posted by Rach at 3:29 PM

Are the Golden Globes REALLY an Indication of what's to come at this years' Oscars?? 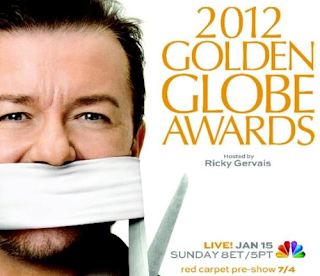 So I may be a little late with bringing up the  2012 Golden Globes but I just wanted to get a few comments in and give you guys a chance to take a look at the Winner's so that we have something to go by when the Oscars air this year I'm so excited I feel like making a little bracket and setting it up like 'March Madness' to see if I can come even close to guessing the big winner's at the 2012 Oscars (yup, I'm a nerd!).

Recently having seen Moneyball, I must say, I thought Brad Pitt had a pretty wonderful performance  although many would argue that Michael Fassbender should take that honor with his performance in Shame. And I think that Michelle Williams should definitely win best female performance for her role as Marilyn Monroe in My Week with Marilyn (plus she's just so damn adorable!). Lastly, as for best picture that will most likely go to The Artist but I would definitely love to see 50/50 or Dragon Tattoo take that honor, but that's just wishful thinking.

Harry Potter all Grown Up!: ' Daniel Radcliffe Talks about One Day Marrying his Girlfriend'! 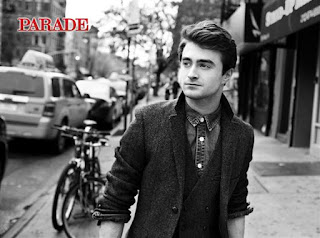 As if the Harry Potter star wasn't adorable enough, in his latest interview with Parade magazine Daniel Radcliffe opens up about his relationship with Rosie Coker who was a PA on the last Potter film.  Radcliffe talks about what a terrible he is was and how being awkward ended up working out for him in the end!  Check out a snippet of what Dan Rad had to say to the magazine,


" When growing up, I thought of marriage as being very official, drawing up a contract. It seemed slightly clinical to me. But then you meet somebody that you really love and you think, ‘Actually, I wouldn’t mind standing up in front of my friends and family and telling them how much I love you and that I want to be with you forever."


**Check out one more photo from the shoot with Parade after the jump! 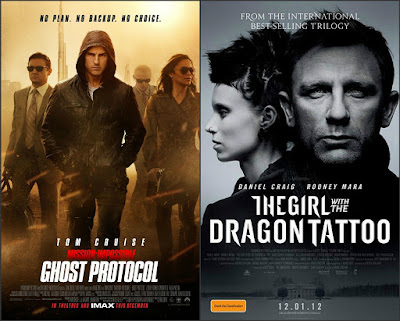 With so much out there to see this Holiday Season it was definitely hard to decide which films to see over my Holiday break.  So with much deliberation I ended up seeing Mission Impossible: Ghost Protocol as well as The Girl With The Dragon Tattoo.  If you're like me and are mulling over what you want to spend your nine bucks a ticket on then hopefully this helps you decide!