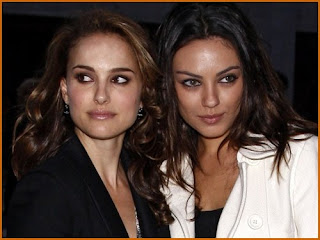 Everyone is buzzing about the upcoming release of director Darren Aronofsky's Black Sawn starring Natalie Portman and Mila Kunis.  Black Sawn is predicted to do quite well at the Oscars this year and is said to be the film to see this year.  Recently, Portman sat down to talk about what everyone really cares about... the sex scene with her and Mila.


“It was pretty awkward,” Natalie said of filming the scene with Mila. “I almost feel like it would be easier to do it with someone you didn’t know,” she said. “But, having said that, it was great to have a friend there who, we could laugh and make jokes and get over it together.”

In Black Swan, Portman plays a ballerina stretched to her limits when she attempts to get the title role in Swan Lake after an older ballerina (Winona Ryder) is forced out of the company due to age.  What Portman's character didn't expect in this challenge was to come up against a rival dancer played by Kunis and the dark road it would taker her down.